TSP: Take it or Leave it?

TSP: Take it or Leave it? 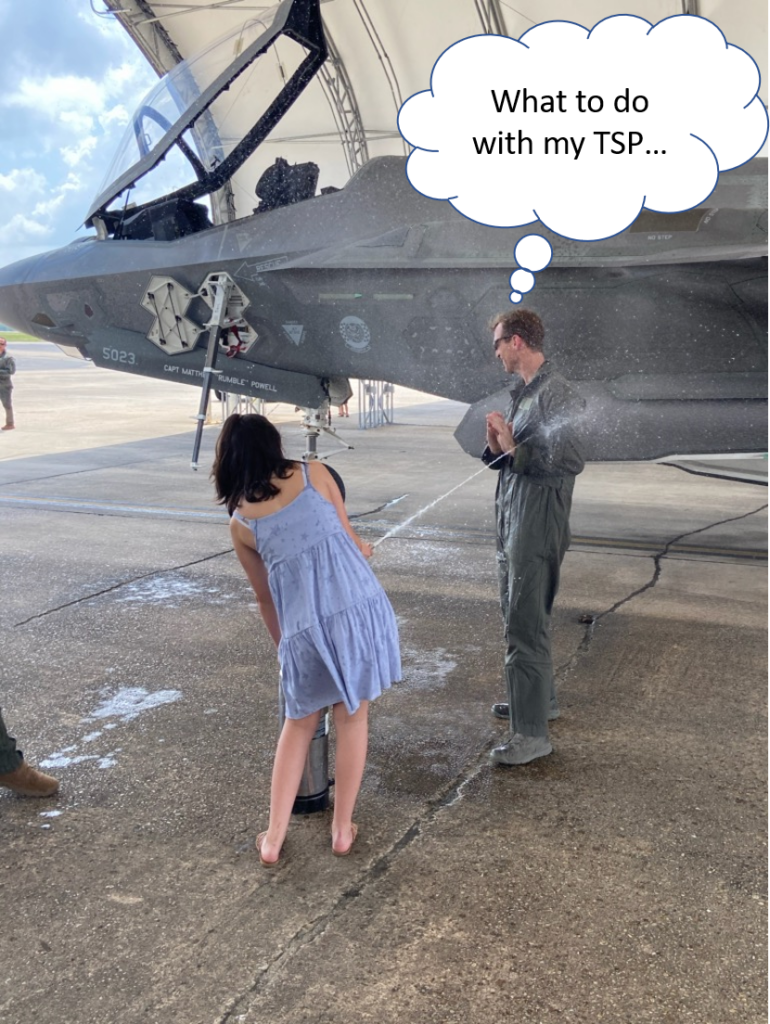 TSP—Take it or Leave it?

You’re soaked in champagne, or the $4.16 version of it that the casual lieutenant picked up at the Class 6.  You’ve got a few thousand hours (hopefully) under your belt and landings are pretty much equal to takeoffs.   As you wrap up the fini-flight celebrations, there’s probably nothing more pressing on your mind than: “Should I leave my money in the TSP, or roll it over to an IRA,” right?

Unfortunately, the question isn’t as easy to answer as something like, “Should I take the bonus?” or “Should I go straight to guns off the perch?” But this article will give you some ammo to help mow down this choice, and the nice thing is, you’ve got time.

Before coming down firmly on both sides of this argument, it’s critical to remember that unless your 59.5 years-old (or have another narrow exception) you can’t start spending this money without paying your current marginal bracket, e.g. 22% or higher, plus a 10% penalty tax for early withdrawal.   If you do want to move your money out of the TSP, you must do a rollover, preferably direct to the institution that you’re moving it to. (e.g. Vanguard, Fidelity, Schwab, etc.)  If you accept the money into your checking account, even as part of the rollover process, the TSP must withhold 20% for taxes.  You have 60 days to put the entire amount (including the 20% that you won’t see again until next April 15th) into the new custodian’s account or you’ll effectively have taken the entire amount as a distribution—read: pay 22% or higher plus 10%.  Don’t be that guy or gal.  The TSP has the forms you’ll need on their website and if you have both Roth and Traditional money, and potentially some after-tax dollars from combat deployments you’ll want to make sure you work with the TSP and your new custodian to properly segregate that money into Roth and Traditional IRAs, rather than comingling it.  If something goes plaid and it ends up comingled, don’t let the issue go.  You could have a tax nightmare on your hands if you let that hot mess simmer for a few years. For simplicity in the rest of this article, I’ll talk about rolling the TSP over to an IRA, but you’ll likely be rolling it over into two IRAs—one for the Traditional dollars and another for the Roth dollars.  One final tip—it’s generally best to open the new IRA accounts with the receiving custodian before initiating the transfer from the TSP.  This is an easy online procedure.

The Case for a TSP Rollover to an IRA

The TSP has been good to you for 12-20+ years, why mess with a good thing?  If you wanted, you could leave your money with the TSP until you die.  But, even though the TSP is a pretty reliable workhorse, there are some reasons to consider just rolling your money over to an IRA.

Okay, so there’s a lot of reasons to rollover your TSP to an IRA.  But before you start slinging paperwork, let’s hear what the defense has to say.

The Case for Staying in the TSP

Sure, the TSP’s got some warts, but it’s been a pretty good autopilot for your wealth-building flight plan.  Why mess with a good thing any earlier than you have to?  I agree and here’s some reasons to stay with the TSP for now.

As with all good questions, the answer is usually, “it depends.”  The TSP rollover choice is no different.  The most critical part is the execution and avoiding unintentional tax consequences.  Leaving your money in the TSP, at least for a few years, is generally a good do-no-harm strategy.  Unless you just retired after 50 years of service and are literally staring at Roth TSP RMDs (I didn’t think so) then you probably have some time to revisit this decision.  Eventually, it probably will be best to move your TSP dollars into an IRA, but you have time, so no need to make an unforced and costly error at a time in your life when you’re already juggling a few flaming chainsaws.  Fight’s On!