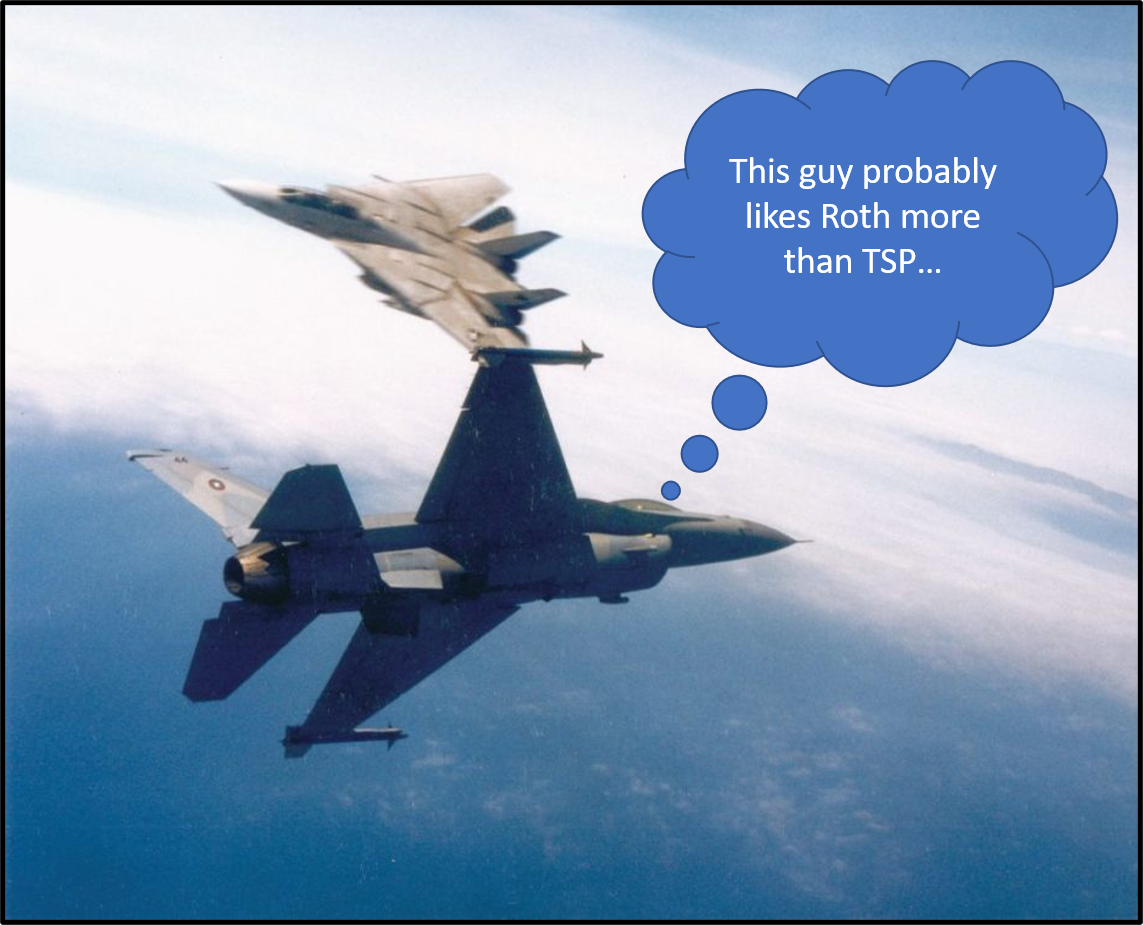 If my math is correct, half of the readers of this article’s title are about ready to blow up my inbox, half would just like to know the answer, and half haven’t read this far.  Clearly my math isn’t correct, but let’s dive into this question, and the real question that’s usually behind it— “Which is better—Roth or Traditional?”

If you’ve been in the military for a minute, you probably have heard that question, “Which is better—a Roth or a TSP?”  It comes from the very real confusion cluster that is the financial world.  Few primary schools teach personal finance and the topic is at best optional in college.  Most of us learn it through trial and error if we learn it at all.

Let’s start with the TSP (Thrift Savings Plan) which is an employer-sponsored, qualified (read: tax advantaged) retirement savings plan.  It’s similar to civilian 401(k) plans (Which doesn’t mean much if you’re still back at the Roth or TSP question, I know).  The TSP allows you to defer part of your paycheck each month, receive preferential tax treatment, and grow the dollars through compounding until you need to use them in retirement.

If you joined the service after 2017, then you’re eligible for the government to match your contributions up to 5% after 2 years of service—which is free money!

The TSP limits your contribution to a certain amount each year based on IRS guidelines and it’s $20,500 in 2022.  Participants over age 50 can contribute an extra $6,500.

Roth is the last name of the senator that sponsored the legislation creating Roth retirement accounts.  Roth is a synonym for “after-tax,” meaning that you’ll pay your typical income tax on the dollars that you contribute to a Roth account such as the Roth TSP.  The benefit of Roth treatment is that contributions grow without being taxed each year.  Then in retirement (generally after age 59.5), you get to access those dollars tax-free.

Roth treatment is incredibly powerful in that it allows savers to pay a generally low tax rate on dollars when they’re young or in the military and not making much and then avoid higher tax rates in retirement when their tax rates are higher after a lifetime of earning and saving.

Roth treatment can also be though of as “tax insurance.”  We don’t know what future tax rates will be.  Many experts predict that they will have to be higher to afford programs like Medicare and interest on the national debt.  Roth dollars won’t be taxed in retirement, so savers can mitigate future tax risk.

Before Roth came along, there was just “TSP” and no need for the adjective “Traditional.” Traditional is a synonym for “pre-tax” or even “tax-deferred.”  With a Traditional retirement account like the TSP, savers skip paying taxes on the contributions as the money is earned, but have to pay taxes when they access the money in retirement after age 59.5.

Savers are allowed to contribute to either or both Roth and Traditional “sides” of their TSP account in a given year, but they can’t exceed the IRS limit unless they’re in a combat zone.  I.e., you can put $10,250 into Roth TSP and Traditional TSP in 2022, but you can’t put $10,251 into both.

Which is Better—Roth or Traditional TSP?

Now that we’ve got the right question squared away, we’ll look at the indigestible answer… it depends.  The most general way to start answering this question for each taxpayer (or family if filing jointly) is to ask, “Do I want more money in my pocket this year, or in my retirement years?”

A contribution to the Traditional TSP puts extra dollars in your wallet this year.  If you’re in the 22% bracket and you contribute $1,000 this year, you’ll have $220 extra in your pocket because you deferred the tax bill until sometime in retirement.

Moving past the most basic question, some families will want to evaluate, “Am I in a temporarily higher tax bracket this year?” Let’s say you receive a large bonus and will have outsized income in a certain year.  It might be appealing to hold on to more of your pay by making Traditional contributions in a high-income year.

$78,550 is squarely in the 12% tax bracket and the tax savings on the year is $600.  So, by choosing to put at least part of the TSP contribution into the Traditional “side,” it’s possible to lower one’s overall tax bracket and tax bill.

Dialing up the sophist-o-meter a bit, let’s address capital gains.  Capital gains tax is the tax we pay when we sell something for more than we paid for it.  If you sell a stock at $100 per share, but you paid $50, then you have a $50 capital gain per share.

It just so happens that the cutoff between the 0% and 15% long-term capital gains brackets is $83,350 for a married-filing-joint couple…essentially the same as the 12% to 22% transition for ordinary income.

Let’s say you’re in a 25% bracket this year and you also expect to be in a 25% bracket in retirement when you withdraw money, then there is no mathematical difference between Traditional and Roth TSP.  Want proof?  Plug the following formulas into Excel.

The first is the future value of pre-tax contributions of $1,000 compounding for 30 years at 10% and then taxed at 25% upon distribution in retirement.

They both return $123,370.52.  But there’s a hidden twist here—would you really contribute less just because you had to pay tax on the dollars as you earned them?  Probably not.  Most of us will find a way to contribute the same amount regardless of the tax in the year of the contribution.

But how do you know what tax bracket you’ll be in during retirement?  The reality is you’ll need a crystal ball, time machine, or other imaginary tool.  We can only make estimates.  Estimating our income, spending, and savings seems daunting, but it’s likely the easy part.  Estimating future tax rates, including state income tax rates is a bit more difficult.

A common technique is to just use current tax law and then revise projections as tax law changes.  Using that method, let’s look at Figure 1. This example illustration incorporates a family’s projected income, savings, and spending over their remaining life time.  The result is that we can see that the family will pay tax rates from the mid 20% range until retiring early at age 55.   At that point, the expected tax rate is 15% until age 70 when Social Security kicks in and creates a new income floor and higher tax bracket.

This family has a couple of options.  By contributing to Traditional accounts pre-retirement, they can hope to Roth-convert some or all of their Traditional dollars during their low tax years.  They would skip paying 22% to 25% in hopes of paying 15%.

Any Traditional dollars remaining after age 70 would, at-worst, be taxed at about the same rate they would have been at the contribution.  This choice requires an estimation not just of earning, saving, spending, and tax rates, but also how many dollars can be Roth-converted during the early-retirement window before ending right back up in a higher tax bracket.

If instead, the family contributes to Roth accounts prior to retirement, then several additional considerations arise:

Figure 2 shows a different family’s profile.  Prior to retirement at age 67, the family earns in the mid-20% to low-30% tax rate range.  They have a small “bathtub” from age 67 to 72 where they can do Roth conversions, but after that, they’ll be trapped in the 30%-plus range for their remaining years.

This family would likely want to mainly contribute to Roth accounts in order to minimize the impact of a high-income floor in retirement.

You can imagine that slight changes in a family’s planned earning, spending, saving, and estimated tax rates have drastic effects on their future tax profile.  This brings us to the key questions that we must answer to make the Roth versus Traditional decision:

The Roth versus Traditional decision can be complicated.  We have to decide if we want more income this year, or lower taxes in a few decades.  To be as accurate as possible, we need to have reasonable estimates of our lifetime earnings, saving, spending and tax rates.  Ultimately, we have to answer, “What is the effect this year… and all of my retirement years?”  That’s no small task.

A few additional concepts to consider may help:

Author’s Note:  This article focused almost exclusively on Roth versus Traditional for TSP (and 401(k)) contributions.  There’s a good deal more to know about IRA considerations, so please don’t extrapolate Roth TSP directly to Roth IRA without diving into the nuances.