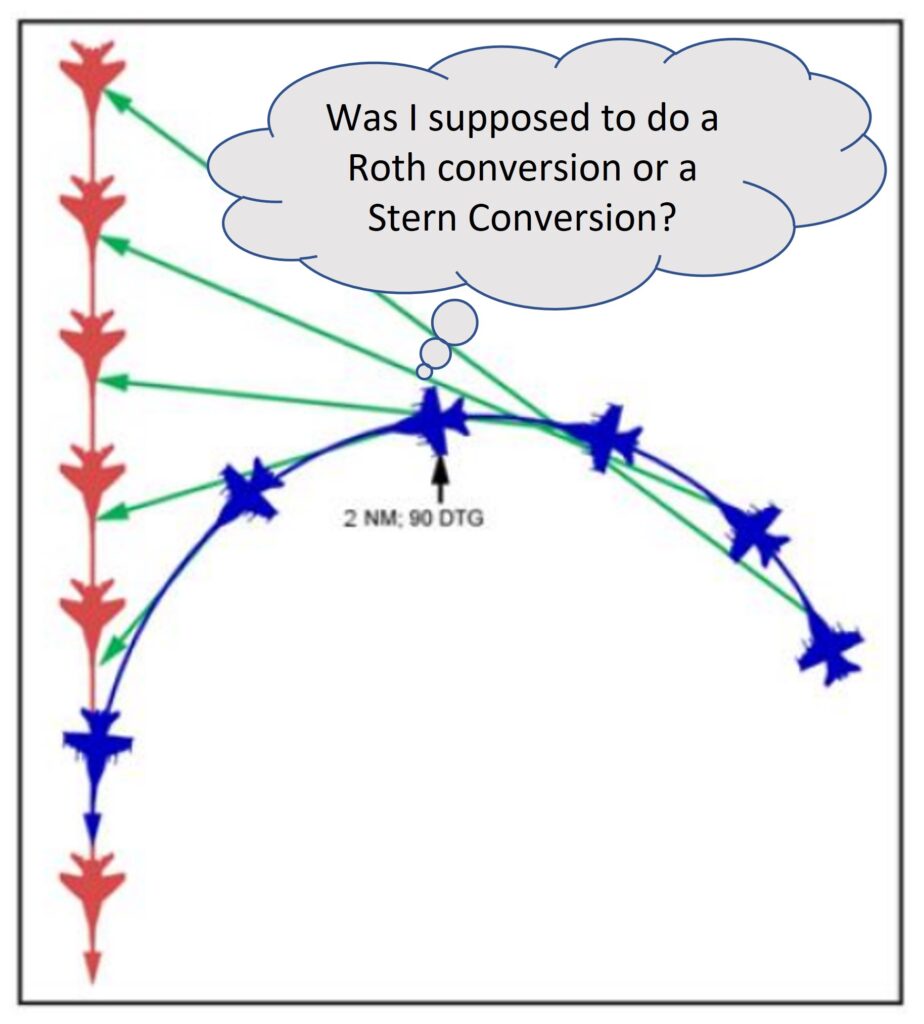 You’re in the squadron bar on Friday afternoon wondering why the Mayor just can’t keep the mob under control. What’s the fuss? Hat on the bar? Wall versus grind? Number of roles in ACM? Nope.  It’s Roth conversions and when is the best time to pay the tax man without leaving a tip? (Clearly this really a dystopian version of what happens in the squadron bar, but read on anyway!)

When you contribute to the Traditional TSP, a 401(k)/403(b), IRA or any other qualified pre-tax account, as long as you meet certain requirements, you get to deduct that contribution from your current income and lower your current tax bill.  For single income officer families below the grade of O-8-ish, that usually means skipping paying 22% today in order to hopefully pay a lower rate in the future when you access those dollars in retirement.

What many wealth-minded folks eventually realize is that their tax rate in retirement is likely to be higher than it was in a large part of their earning years, not lower.  This is especially true for retired O-6+ types.

Here’s an easy example: Assume that you’re a 67-year-old retired O-5 with a couple of rental houses and claiming social security for you and your spouse.  Your total income might look like figure 1. 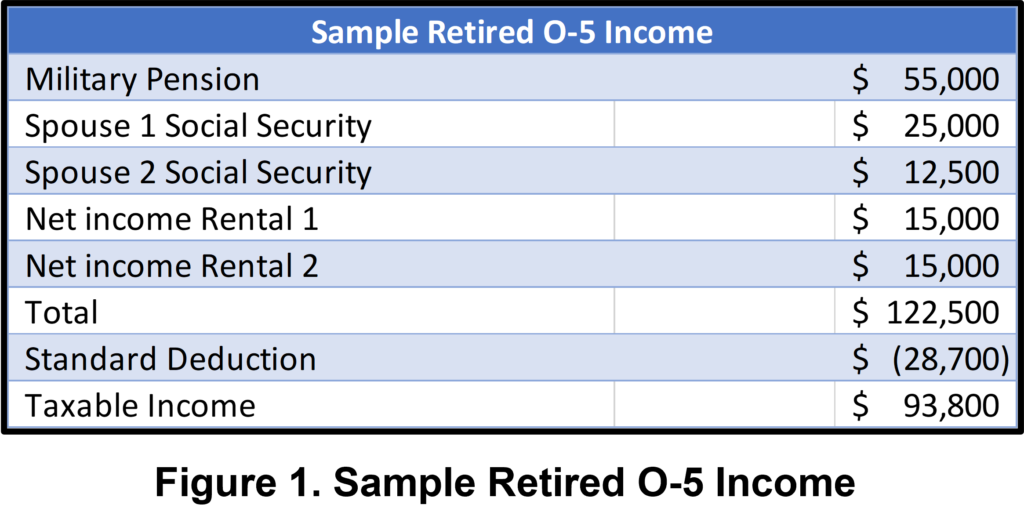 There’s a couple of easter eggs in this chart. First, you’re not withdrawing anything from your pre-tax accounts yet, so income is lower than it will be at age 72+ when you must take required minimum distributions (RMDs) from those accounts.  Second, it’s currently 2022 and lower tax brackets are still in effect from the 2017 TCJA law.  In 2026, the tax brackets snap back and there’s no longer a 22% bracket—it becomes 25%.

So, if hypothetically you did your earning and saving in pre-tax accounts at a tax rate lower than 25%, then you skipped paying a lower tax rate in order to pay a higher rate later.  Ouch!

If we look at Figure 2 for a retired O-6 with a little more pension income and a little more Social Security income plus a 4% withdrawal from a $2M pre-tax account, the taxable income gets into the 24% bracket today but would be 28% in 2026 and later—just a few short years from now when the TCJA rate expire.  I.e., said O-6 would need to have earned his/her dollars in a bracket higher than 28% to pay a lower tax rate in retirement.  That could be true for some post-military years, but probably isn’t true for many active duty years. 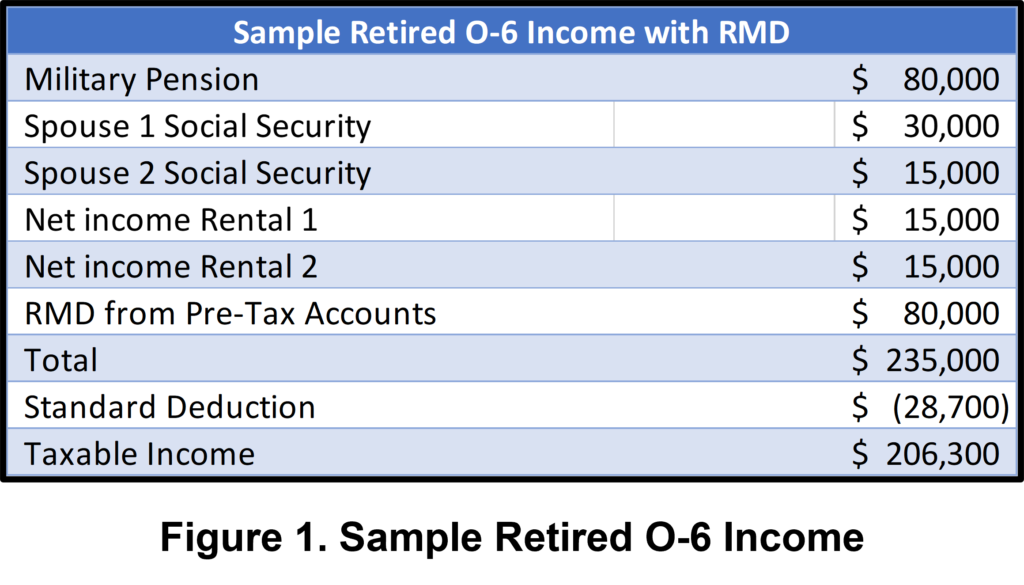 The bottom line: you must have a crystal ball to know what your tax rate will be in the future, but you do know what it is now.  If you will likely pay a higher rate in the future, skipping pre-tax contributions and going for Roth (and potentially Roth conversions) makes more sense.

A Roth conversion is simply choosing to pay tax today on pre-tax account balances (partial or in full) in order to move those dollars to a Roth account and receive Roth treatment going forward.  Recall that under most conditions, dollars in a Roth account aren’t taxed when you access them in retirement.

For example, if you have $100K in a Traditional TSP account, and you’ve separated/retired such that you’re no longer an active participant, you can rollover those Traditional (pre-tax) dollars to a Roth IRA.  You’ll pay your current tax rate (e.g., 22% or 24%) to do so, but then you don’t pay income tax on those dollars (and their future growth) ever again.

What’s more, Roth IRA accounts do not have Required Minimum Distributions at age 72, so your money can compound even longer.

A Roth conversion is simply a tactic to try to pay less in taxes today than you think you will pay tomorrow.

Roth Conversions and the TSP

One problem for many service members, especially O-5’s and higher that only had access to Traditional TSP for many of their early saving years is that you cannot perform Roth conversions on TSP dollars until you retire or separate from service.  The is not always true with 401(k)/403(b) accounts as every plan is different.

What’s more, there are many great reasons to stay in the TSP even after you separate/retire.  Tax math doesn’t factor in the benefits of the G Fund or the creditor protection of the TSP structure.

It’s best to get professional, fiduciary advice from someone that understands the TSP specifically before considering a Roth conversion from the TSP.

Most savers don’t think about Roth conversions until they’re in their 60’s. The driving reason is that once the paycheck switch is in the OFF mode, income tax rates may be lower due to less income, thus there’s more room in a given tax bracket to convert Traditional dollars without tripping into a higher tax bracket.  From retirement (meaning: no wage income) to Social Security claiming age (meaning: more taxable income) and then age 72 (meaning: forced RMD income) is often consider “the” Roth conversion window.

Unfortunately, delaying until one’s 60’s can cause problems:

This list isn’t exhaustive (TLDR is real…) but you get the idea, it’s important to think through traditional “wisdom” about when to do Roth conversions before just putting it off until your 60’s.

Roth Conversions can Hurt the Young Too

The IRMAA tax affects you after age 63, but you may be trying to “look poor” for the college financial aid process in your 40’s and 50’s, so those might not be good years to recognize additional income for Roth conversions.

Here’s a list of other taxes, credits, opportunities, and deductions that could be affected by recognizing additional income in a year:

Does the Time of Year Matter?

Let’s assume that you’re convinced that Roth conversions might be worth doing, does it matter when during the year you pull the trigger? Absolutely.

The most common approach to Roth conversions is to choose the tax bracket target and “fill up the bracket.” I.e., if your taxable income in 2022 would be $150K as a married couple, then you have $28,150 of “headroom” in the 22% bracket before any Roth conversion dollars would start to be taxed at the next highest bracket of 24%.

If your only source of family income is wages, then it’s pretty easy to predict/calculate your taxable income.  However, many families have interest income, dividend income (some of which is taxed at ordinary versus capital gain rates), short-term capital gain income, and potentially side-hustle income.  Many of these types of income won’t be fully known until late in the year—often the lasts weeks of December.

Roth conversions must be completed by 31 December to count for the tax year.  (Imagine the frenzy coming in December 2025…) Investment institutions that help you do the conversion not only have to deal with lots of federal holidays in the later part of the year, but hordes of people are clogging up the workflow with Roth conversions, charitable contributions, tax-loss harvesting and other investment-tax maneuvers.  Time runs short at the key time of year!

So, while you can do Roth conversions early in the calendar year, you need to be certain what tax bracket you’re targeting and how much headroom you’ll have in that bracket.  Roth conversions cannot be “undone” or re-characterized.  If you overshoot, you’ll pay the higher tax rate for the dollars that get orphaned into the next bracket (e.g., 24% or 32%).  You’ll also deal with any lost credits and deductions

Another crucial issue is market performance.  Imagine that you’ve met all other criteria for doing a Roth conversion of your $100K pre-tax balance and it’s January 2020.  Then COVID hits and you decide do your Roth conversion on March 23, 2020.  You convert 100% of your pre-tax balance, but instead of paying taxes on $100K, you’d pay taxes on say, $60K to $70K.  Assuming you reinvested the funds right away, you get a huge discount on your tax bill and yet your dollars recovered through the rest of the year with their tax-fighting Roth force field in place!

This topic gets confusing quick, so let’s look at a planning checklist you can use for timing your Roth Conversions.

If you’re still reading, you’re eyes are probably watering at how awesome Roth conversions can be, right? But timing does matter.  Roth conversions early in life create can drastically lower your lifetime tax bill even if they increase it this year.  But there are a lot of twists and turns in the tax code, so it’s important to map out all of the ripple effects of a Roth conversion in a given year.  Market performance plays into the equation as well, so talk to your financial planner before moving out on any Roth conversion.