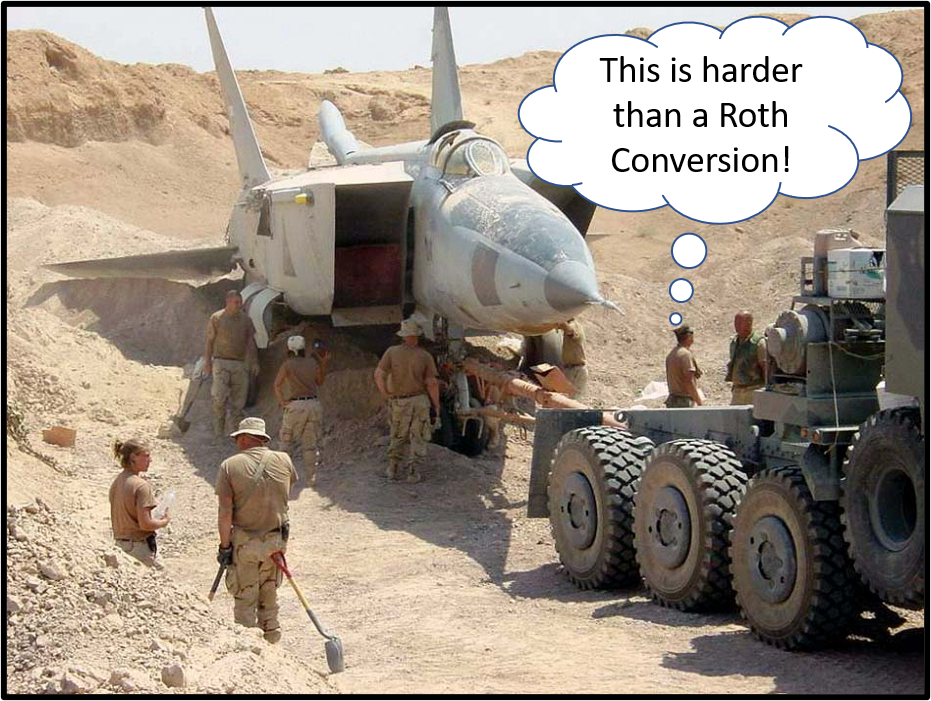 Bears seems to be roaming the markets, gnawing on paper profits.  Despite knowing that stock market declines mean that the market is on sale, too many of us rush out of the store when the sale really gets going.  But what about Roth Conversions—are those a good idea when the market is down?

Let’s revisit Roth Conversion basics for a moment.  When you save in a pre-tax or Traditional IRA/TSP/401(k) etc., you skipped paying income tax on the dollars you stashed away.  The tradeoff is that when the dollars leave that pre-tax account, you know Aunt IRS will be waiting for her share.

Most of us invest in retirement accounts thinking we won’t touch the funds until our sixties or later.  But one of the most common retirement planning tools involves moving that pre-tax money before we need to spend it.  This is a called a Roth Conversion.

Simply put, a Roth Conversion is transferring money from a pre-tax or Traditional IRA/TSP/401(k) etc., to a Roth IRA. The act of moving the dollars out of the pre-tax account means that a 1099-R will arrive the following February and a tax bill will come due on April 15th.

(Note that it’s also possible in some employer plans to do Roth Conversions while keeping money inside the plan.  The TSP does not currently allow this.)

The benefit of a Roth Conversion is that the dollars continue to grow without annual taxation and can be accessed in retirement, tax-free in most cases.  A Roth Conversion changes the taxation characteristics of your money not only for the rest of your life, but for at least the first 10 years that your heirs inherit it!

The most common time for investors to do Roth Conversions is during low-income years—typically after flipping the “paycheck off switch,” and before claiming Social Security (age 62 to 70) or taking Required Minimum Distributions (age 72).

Figure 1 shows a “bathtub” from age 60 when this investor retires to age 67 when the investor starts claiming Social Security. This period is often called the Tax Planning Window.  When a retiree starts drawing from their nest egg and there’s no longer a steady paycheck propelling the tax brackets, the Federal Tax Bracket often drops. 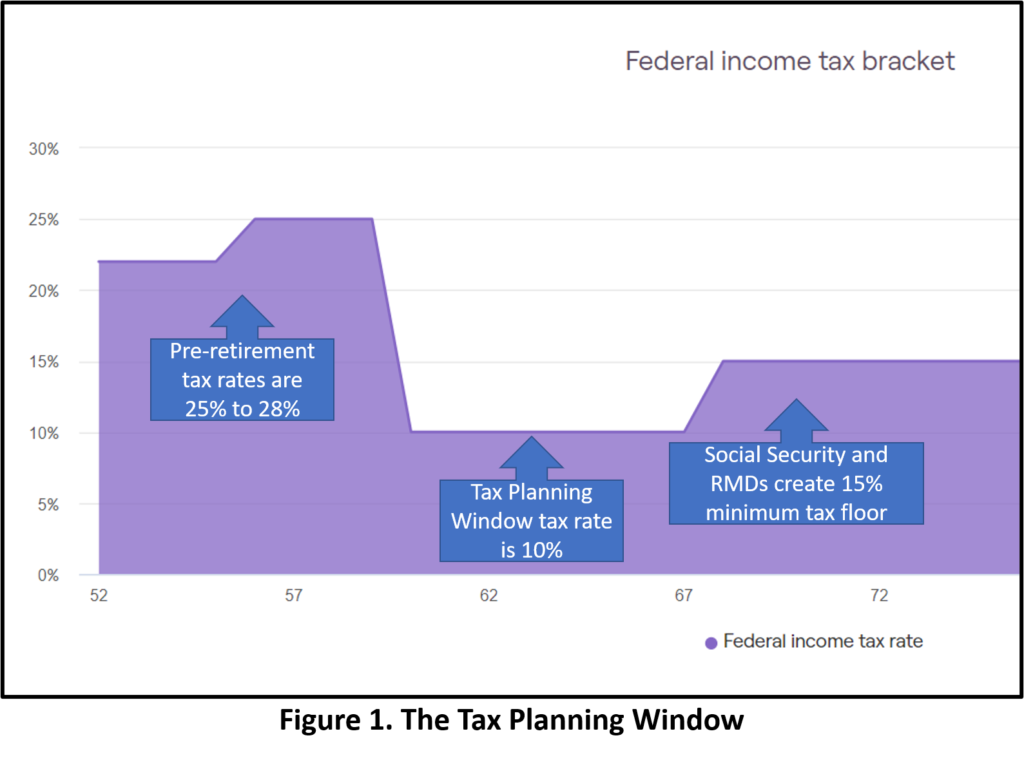 In Figure 1, the tax bracket prior to retirement is 28% but then for the first seven years of retirement, the rate drops to 10%.  Once Social Security kicks in, the tax rate jumps back up to 15%.  This means that Roth Conversions, which look just like other sources of income for federal income tax purposes, can be done at the lower tax brackets after the paycheck years but before Social Security and RMDs kick in.

Put another way, the taxpayer skips paying tax at 25% to 28% and instead pays 10% to 15% on those dollars.  This is often called filling up the tax brackets and is best timed in years of predictably low income.

The tax code is written in pencil, so while a planned tax increase is on the books for 2026, we really have no idea what future tax rates will be.  Figure 2 shows the brackets for 2022.  We can see that a married couple fills up the 10% bracket with just over $20K of taxable income and the 12% bracket with $83,550. 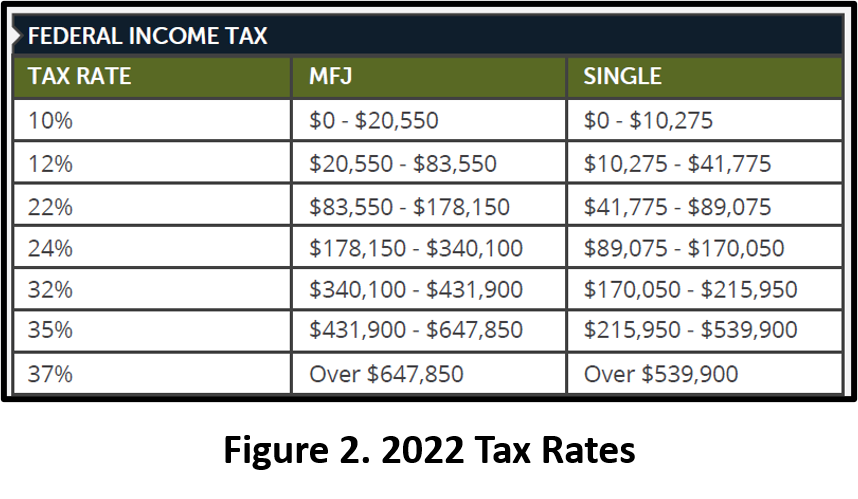 If the 12% bracket was the target, then as long as the family had no other income, a married couple could convert $109,450 from Traditional to Roth while staying in the 12% bracket in 2022.

Roth Conversions in a Bear Market

If your goal is to try to eventually convert most or all of your Traditional / pre-tax IRA, TSP, or 401(k) to Roth, then a Bear Market can create a real opportunity. Let’s say you have $500K in a Traditional IRA (or TSP / 401(k)) and because of retirement or other reasons, you’ll have some low-income years coming up.

It’s possible to forecast what amount you’ll need to convert each year to avoid climbing too high in the tax brackets.  Figure 3 shows the tax brackets from 2022 to 2025 without any inflation (wishful thinking…).  In 2026 when the brackets revert to 2017 levels, the dollar cutoffs are hypothetical, but reasonable estimates for comparison.  The asterisks indicate that a tax rate is not in effect for that year. 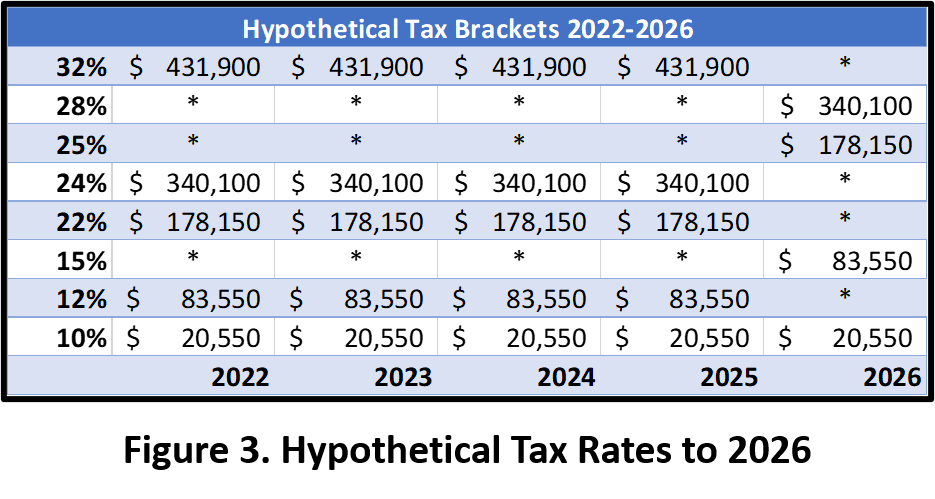 Let’s assume you want to try to only do Roth Conversions if you can pay 12% or less.  As long as you can suppress all other income sources (pensions, capital gains, dividends, rental income, etc.) then you could plan to convert $109,450 from 2022 to 2025 (as seen above, the standard deduction will take Adjusted Gross Income down to $83,550 of taxable income), per year for 4 years for a total of $437,800.

Certainly, paying only 12% on money that was probably earned at 22% or higher is a great deal, but it doesn’t meet the goal of converting a full $500K.  Time to smile at the Bear!

During a market decline, the size of your pre-tax nest egg shrinks.  You expect this to be temporary, but the reality is, it’s easier to Roth Convert a larger proportion of your pre-tax balance when a Bear Market has shrunk the size of that balance.

A 20% decline in the market turns $500K to $400K on paper.  While we wouldn’t hope for a Bear Market to last a lot of years, any period of market decline is an opportunity to move a larger slice of a (temporarily) smaller pie from Traditional to Roth.

Can I Actually do Roth Conversions?

The biggest problem for most of us is that we’re not just still working, but we might be still a participant in the TSP.  The TSP does not allow for conversions to an IRA while you’re still a participant including Active Duty, National Guard, or Reserves.  To convert Traditional TSP dollars to a Roth IRA, you’ll need to be separated or retired.  Then it’s green-light-go.

Traditional IRAs, as well as SIMPLE and SEP IRAs have no such limits.  If you have pre-tax money in a Traditional, SIMPLE, or SEP IRA, you can effectively do Roth Conversions whenever you want. (SIMPLE IRAs have to wait 2 years from the first contribution.)

If you’re separating or retiring from military service soon and perhaps getting ready to suck up first-year First Officer pay, you might actually be staring at a trifecta:

If you have the cash to pay the taxes, these conditions create a great opportunity to do some heavy lifting from the Traditional pile of dollars to the Roth pile of dollars.

Should I do Roth Conversions?

You know the answer to this one—it depends! The basic speculation of Roth Conversion is that you or your heirs will pay a higher tax rate when you access the dollars than when you earned the dollars.  Skip paying 32% today in order to hope to pay 25% later, etc.

If your crystal ball is like mine, it’s a Cat III Hangar Queen without good prospects.  That said, current tax rates are historically low and the future need for government revenue seems likely to be high, so it’s not unreasonable to expect higher tax rates in retirement.

In addition to expecting higher tax rates later, some other common reasons to do Roth Conversions might be:

Roth Conversions are one of the most powerful tools in Financial Planning.  When the stock market is down, Roth Conversions can be on steroids because they lift a greater proportion of your wealth from the pre-tax pile to the tax-free pile.  The most important thing to remember is that you need to forecast the impact not just on your current-year tax bill, but your lifetime tax bill as well.

If the Bears are handing out lemons, talk to your Financial Planner to see if Roth Conversions can make a great recipe for lemonade!