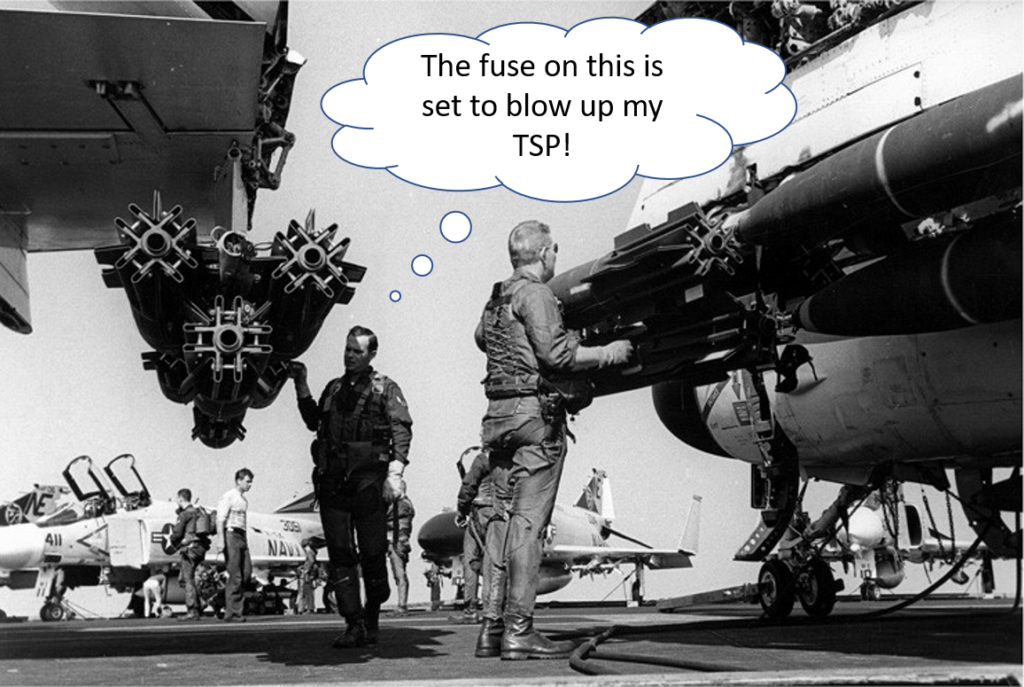 Your fini-flight is in the books and you’re wearing that tiny USAF Retired pin on your lapel.  Clearly, the first thing on your mind is, “How do I deal with the tax bomb coming from this pile of Traditional TSP dollars?”  If that’s true, you’re weird like me, so keep reading.  If not, you’ll eventually have this thought, so keep reading anyway.

If you’re 72 today with a Traditional TSP balance of $4.5M, your first RMD is $175K.  If that were your only income as a married couple, you’d be in the 24% federal tax bracket.  It’s probably not your only income if you’re reading this because you likely have a military pension of at least $50K and you’re over 70 so you’re claiming Social Security for another say, $25K.

If this combined $250K is your only income, you’re still in the 24% bracket today, but your tax bill is steep and you’re now paying the “phantom” tax of IRMAA (Income-Related Monthly Adjustment Amount) which in 2021 is $386 per spouse per month or an extra $9,264 per year.  On an income of $250K, that’s basically an extra 4% tax.  Don’t forget about the possibility of the .9% additional Medicare tax and the 3.8% Net Investment Income Tax (NIIT) which could be triggered depending on your actual sources of income.

So yes, an outsized Traditional TSP balance could make something explode—your head, when you read the “what you owe” line of your tax return.

The first step in defusing the Traditional TSP Tax bomb is to consider converting Traditional TSP dollars to Roth dollars.  You’ll need to roll the money out of the TSP into an IRA and pay tax on the conversion at your current top marginal rate, e.g. 22% or 24%.  Once tucked away in your Roth IRA, those dollars grow and remain tax-free until you use them after age 59.5, or up to 10 years after you leave them to your heirs.

If you pull out your handy-dandy 3-1.Money (sorry-it’s still in coord at the 2 Star level…), you’ll find the unfortunate rule that you can’t do a Roth conversion on your TSP dollars until after you retire or separate from the military. The best you can do to manage a sizable Traditional TSP balance while you’re still active/ANG/ARC is to contribute to the Roth TSP instead.  Even that decision might not be the best fit based on your combined family income in a given year! 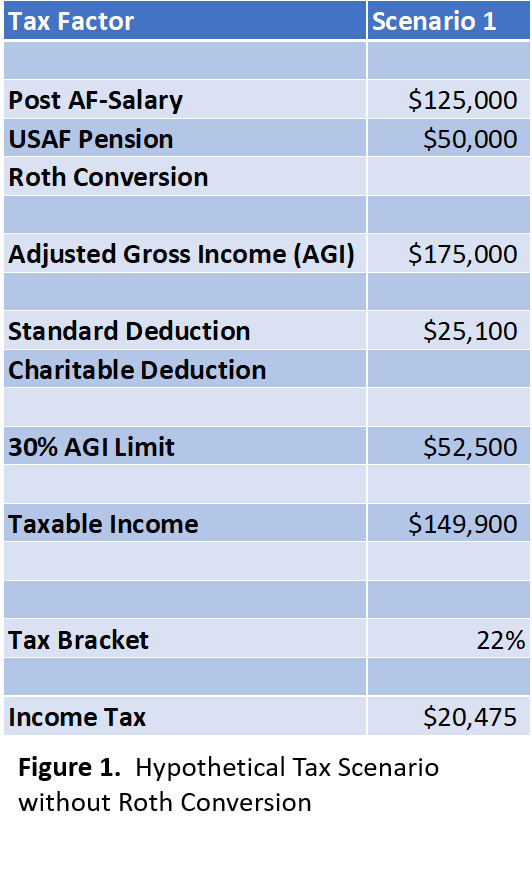 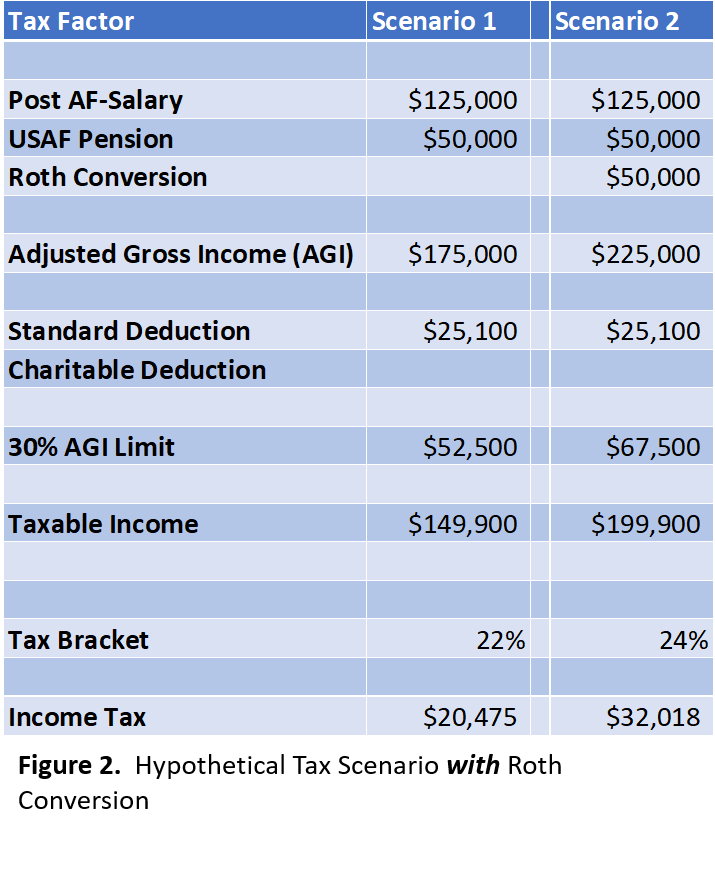 That extra tax bill is still better than the effects of a sizable Traditional TSP tax bomb in your 70’s, but what if there was a way to get someone else to pay that tax bill for you?

If you’re charitably inclined, you have an extra tool in your tax bomb kit.  Let’s imagine that in addition to your chunky Traditional TSP balance, you’ve also been dabbling in stocks in your taxable brokerage account.  If you bought 10,000 shares of (hypothetical) ticker FTR when it IPO’d at $.35 back in March 2009 you spent $3,500, but it’s now worth $35 a share, and you have $350,000 worth of a single stock on your balance sheet.

Let’s assume that your investment thesis for holding FTR has run its course, but you’re not interested in recognizing the punch-in-the-neck tax bill from selling shares at a nearly 100% gain.  (If you sell $50K of FTR, your LTCG tax bill is probably $7,500.)  Depending on the rest of your tax scenario, you could also be phased out of certain credits and other deductions.

What if you donate some of that FTR stock to your favorite qualified charitable organization in the same year you do a Roth conversion? 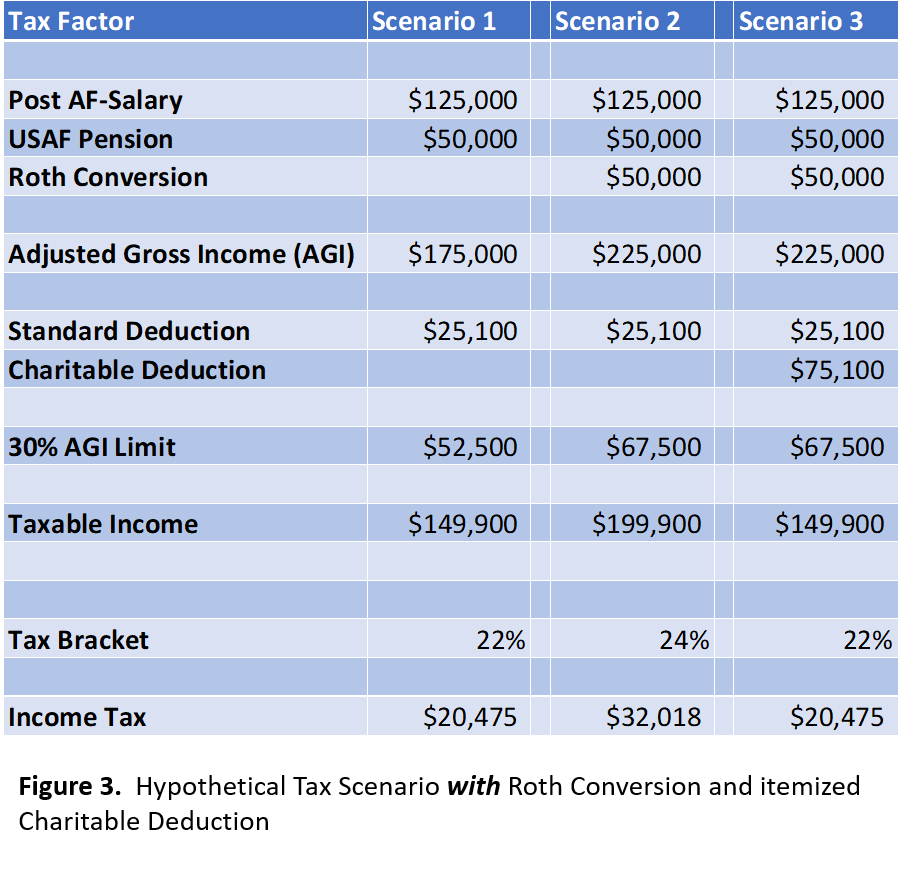 Now, for those of you at home plugging this into your own favorite tax projection software, you may notice some trickery going on.  There is a limit for deducting capital gain assets—30% of your AGI.  In this scenario, you’d have to donate $75,100 to make up for the $25,100 standard deduction and $50K Roth conversion, but the 30% limit is $67,500.  You wouldn’t actually get to deduct all $75,100 of the FTR stock donation this year.  You would have to carry the extra $7,600 forward to the next tax year.

While this could be the case for some taxpayers, once you’re able to itemize, i.e., you have deductions over the current standard deduction of $25,100 for married couples, then you can itemize things like your state and local taxes (SALT) up to $10,000 and your mortgage interest (up to $750K of a mortgage).

So, while you couldn’t get to $75,100 of itemized deductions with a charitable donation alone in this scenario, you probably could with your SALT and mortgage interest.  I skipped this for simplicity in the original scenarios.

To Roth-convert or not Roth-convert is an annual tax projection exercise, but sooner or later, most of us will need to stare down this issue.  If your Traditional TSP is starting to make a ticking noise, you might want to look at how to offset the tax bomb.

Charitable donations don’t have to be cash, but that broken Ikea Glubenförkên that you dropped off at Goodwill isn’t going to nudge your tax bill much if you can’t itemize.  If you’ve got appreciated assets that make sense to offload, you might as well offset some income with them.

The title of this article suggests a 3-way fight between Roth conversions, charities, and your tax bill.  Who wins?  If you do it right—everyone.