Roth IRAs and TSP: AMRAAMs for your Retirement?

Roth IRAs and TSP: AMRAAMs for your Retirement?

Roth TSP & IRAs- the AMRAAMs of your Retirement

FOX 3 Northern, North Group! The AMRAAM- it’s fire and forget.  Target the group, confirm the parameters, take the shot and continue with the tactic and mission.  Okay, so we all know there’s a little more to the story, but compared to its predecessors, the AMRAAM lives up to its fire and forget bumper sticker.  Your Roth IRA and TSP are much the same.[1]

For most fighter pilots serving a 12-20+ year career, the choice of Roth or Traditional IRA and TSP clearly tilts to Roth.  Remember that the big upfront difference between Roth and Traditional accounts is:

Traditional: Skip income tax now, but pay it when you take the money out at your future bracket.  E.g., Invest $1000 today while in the 22% bracket, skip the $220 tax bill.  Potentially, you may even lower your tax bracket by contributing to a Traditional IRA.   Money grows at 10% for 35 years, but if you take out the $28,000, you’ll pay taxes according to your tax bracket.  They key question is, what will that tax bracket be? If it’s the same 22% as today, then it’s a wash.  Few experts think taxes will be anything but higher.

Fire and Forget factor #1:  You lock in today’s tax rates.  My crystal ball is code 3, so I don’t know what future tax rates will be.  I do know that they are at historic lows currently and are set to automatically rise in 2026 when current tax law sunsets (e.g., 22% reverts to 25%).  Additionally, high government borrowing and the need to pay for aging Baby Boomers both suggest higher future tax rates.

Now, my belief is that both will be in higher brackets when it’s time start taking money out of their TSP/IRA accounts and here’s why.  First, let’s assume that if a young pilot is smart enough to start retirement savings in his/her early 20s, and said pilot continues to save diligently over the years—ideally maxing out the annual limits on their TSP and IRA.  For simplicity , let’s assume that this FNG puts away 10% of base pay + flight pay only into the TSP.  We’ll also assume that base pay increases a flat 5% per year, flight pay remains unchained from current rates, and that after a 20-year military retirement, this (now) silverback doesn’t contribute another dime to the TSP.  His/her money will continue to grow until age 72 when this nest egg will have grown to about a (dream car choice)-supporting $9.6M (Figure 1).  Even if, having won the game, the pilot downshifts to a less-risky portfolio earning 6% at age 62, the balance is still over $6.3M at age 72.  Again, this Silverback can still buy a (dream car choice).  The first required minimum distribution from those accounts, mandated at age 72, might be about 4%, or $384,000 (10% return) or $252,000 (10% downshifted to 6%).  Assuming today’s tax brackets, this results in a tax bracket between 32-35%.[3]  What’s more, we haven’t factored in that the pilot would be receiving both a military pension and social security at this time.  Thus, the actual tax bracket could be higher!

[1] In most ways, TSP and civilian 401(k) accounts are alike, but this article will assume TSP use for simplicity.

[3] Depending on married or single filing. 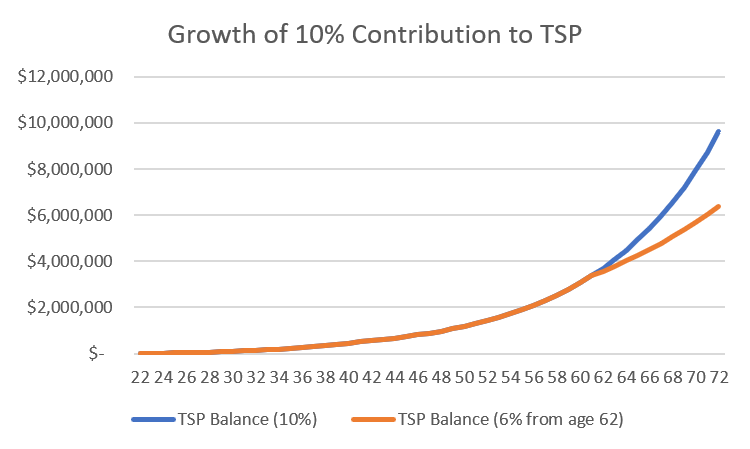 Now, there’s a lot of variables between now and age 72 whether you’re a butter bar or a tactical liability (field grader).  So perhaps it would be easier to just consider the effects of a military pension and social security first.

An O-5 retiring in 2020 after 20 years receives a pre-tax, but taxable pension of about $55,000.  If said pilot could receive social security today, a rough estimate would be about $25,000 per year.  Taken together, this creates an income floor of about $80,000.  Now, if COLAs and inflation and tax brackets all increase at about the same rate, we can assume that this pilot would always have the equivalent of an $80,000 inflation-adjusted income floor.  For a single pilot, this means a high Pk residence in at least the 22% or higher-future-equivalent bracket.  For a married pilot, $80,000 is right on the edge of the current 22% bracket, so there’s more room for uncertainty about whether or not the income floor might squeak under today’s 22% bracket.  The critical planning factor though, is that such a pilot will have an income floor that will drive a (potentially) high tax bracket, so any money coming from Traditional TSP or IRA distributions, only drives up the tax bracket more.  Putting all of those numbers together, a reasonable scenario is that pilot could get to the point at age 72 when Uncle Sam demands the start of required minimum distributions from TSP and traditional IRA accounts, and if the pilot’s TSP/IRA money is traditional (aka tax-deferred), then gross income might be ($80K + ($384K or $255K)) = $464K or $335K, thus the 32%-35% tax bracket risk.

So how is Roth TSP Fire and Forget?  Well, if the last two paragraphs nearly made your head explode, then consider this: Arrive at age 72 with a guaranteed taxable income of about $80K and maybe a 25% future tax bracket on that kind of income, but you’re really living off of $80K + $255K to $384K because you saved in all of your TSP money in the Roth side of the house.  Pickle on the Roth target, then let the compound returns build for the decades and you don’t have to worry about rising tax brackets resulting from years of superior saving and tax management behavior.

“Can’t I just convert the Traditional dollars to Roth dollars at some point?”

You bet, but that’s much more of a “Fire and every-year-anxiously-monitor-growth-and-taxes-and-annual-income-and-tax-law-and-politics-so-on” strategy.  Fire and forget leaves a lot more bandwidth for other activities like griping about taxes and politics and so on.  Roth conversions are likely to be a key component for most Gen-X and Gen-Y pilots because the TSP only started accepting Roth contributions in 2010.  The TSP doesn’t allow conversion of TSP dollars to Roth dollars inside the TSP.  So, if you have a Traditional balance, you’ll want to starting planning for Roth conversions as soon as you retire or separate from the service.  (Maybe even sooner if you’ll be taking a pay cut for first year airline pay…)

“Fire and Forget” vs “Nickel on the Grass, here’s your increased tax bill…”

There are other Fire and Forget attributes of Roth TSP and IRAs.  Key among them is your legacy.  Using the figures from the previous example, it’s not hard to imagine taking your last shot of Jeremiah Weed and still having a pretty big balance in your retirement accounts.  When you leave a traditional balance (TSP or IRA) to your heirs, they have to pay the taxes.  That’s not necessarily a bad thing.  At least taxes get deferred for as much as another 10 years, and their tax bracket might be a lot lower than yours if they’re just starting out.[4]  But if you leave Roth accounts, the tax man took his cut a few decades earlier, so you don’t stick your heirs with the grief of your passing and a tax bill at the same time.  (Remember, money they take out of an inherited traditional account gets added to their income each year, potentially boosting their tax bracket!)

At the beginning of this article, I mentioned that AMRAAMs are essentially fire-and-forget*, where * = there are a few other considerations for the best Pk shot…  The same is true of Roth TSP.  Unlike Roth IRA, Roth TSP does have required minimum distributions at age 72. While you may very well never have to worry about a minimum distribution, you might want to buy yourself the flexibility down the road.  At some point prior to age 72, it may be wise move your Roth TSP money into a Roth IRA in order to eliminate the minimum distribution issue.  Before making that move however, consider that the TSP is one of the least expensive investment locations and advisors can’t directly bill you on a TSP balance if your advisor bills on AUM (assets under management).  If you move your TSP money to an IRA that you don’t self-manage, this may increase advisory costs.   A good fiduciary advisor will discuss the pros and cons, as well as the conflicts of interest in this situation.  The bottom line is that your financial plan should identify key times to consider changing investment location and the consequences therein.

There are countless scenarios for Roth vs. Traditional TSP and IRA choices, so the example numbers in this article might not be a good fit for your family.  That said, for most pilots and especially those just starting out, the Roth option is the closest to Fire and Forget since it (probably) reduces taxes paid, insulates against future tax hikes, acknowledges high income floors that military pensioners earn, and reduces the tax bill handed to future generations.  Fox 3!

[4] The SECURE Act, passed in 2019, required beneficiaries of IRAs to liquidate them over a period of no more than 10 years.