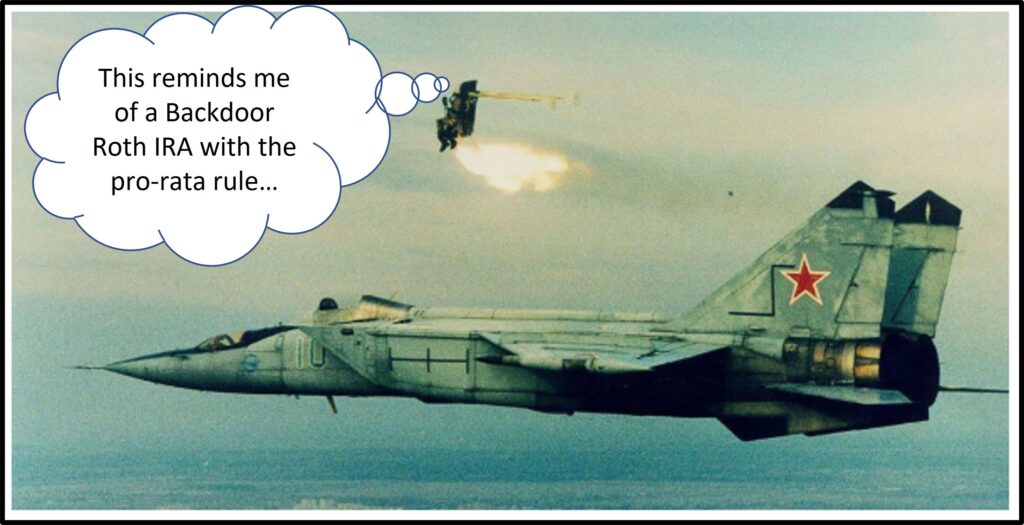 A Backdoor Roth IRA is just a Roth IRA with an administrative penalty lap.  Kind of like filling out your medical history for the 369th time before your flight physical.  It’s both necessary and unnecessary, but ultimately, you need to do it to get where you want to be.

As a refresher, here are the main kinds of IRAs (that you care about):

While Uncle Sam wants to incentivize retirement saving, he doesn’t particularly want the rich to get too many tax breaks (well, maybe the really, really rich…).  As such, there are inflation-indexed income limits for contributions to Traditional and Roth IRAs to keep the wealthy from getting outsized tax-advantaged savings opportunities.

To complicate matters, the deductibility of a Traditional IRA contribution is pegged to whether or not your employer offers a tax-advantaged retirement plan (the military does).  Rather than dry your eyes up with all the details, Table 1 is a summary.

From Table 1, you can see that the Backdoor Roth IRA is basically the offspring of the Non-Deductible Traditional IRA and the Roth IRA.  It has the best trait of the Non-Deductible Traditional IRA: unlimited income. It also has the best trait of the Roth IRA: no taxes on the compounded returns in retirement.  It’s like being able to Wall and Grind at the same time.  The effect is that there is actually no income limit for a Backdoor Roth IRA.

How Do I Contribute to a Backdoor Roth IRA?

Step 1.  Open and contribute (ideally) the annual limit to a (Non-Deductible) Traditional IRA at your favorite brokerage (e.g. Fidelity, Vanguard, Schwab, etc.), preferably where you have your Roth IRA from those “lean” years when you could contribute directly. If you already have a Traditional IRA, you can use it if the balance is $0—more on this in a moment.

You save yourself a lot of work if you fund the account at one time versus dollar-cost-averaging over the year, but more to follow on this later.  I recommend selecting a money market fund or cash so that you generate as close to zero earnings as possible during your money’s short stay in this Non-deductible Traditional IRA account (but you don’t want it to lose value either).  You can use the same account each year, it will just have a zero balance when you’re not doing your Backdoor gymnastics.

Step 2. Wait a day.  Seriously, no need to wait any longer.  Log in and transfer the money from the (Non-Deductible) Traditional IRA to your Roth IRA.  Your brokerage may warn that this could be a taxable event, but that’s unlikely since you paid taxes on the funds prior to funding the (Non-Deductible) Traditional IRA and there haven’t been any earnings in the last 24 hours.  Yes, it’s a taxable event, but the tax bill is $0 on $0 earnings.

Step 3.  Fill out IRS Form 8606 (or have your tax preparer do it).  This is critical and could generate a penalty if skipped.  This form tracks money flowing in and out of Non-Deductible IRAs. (If a Non-deductible balance carries from year to year, Form 8606 is often the only place where that balance gets tracked, if at all.) Boom! Backdoor Roth IRA!

For most of us, this is as complicated as the process gets.  You can earn a gazillion dollars and still contribute to a Roth IRA with a quick administrative penalty lap through a Non-Deductible Traditional IRA and form 8606.

Unfortunately, if you already had money in a Traditional IRA, SIMPLE IRA, or SEP IRA, you may not be able to contribute to a Backdoor Roth IRA, or at least not without some extra work or taxes due.  First, the IRS considers all three of those IRAs to have the same tax character—they are made up of pre-tax dollars, so let’s just think of them as pre-tax IRAs for a moment.  Second, even if you have several different pre-tax IRA accounts in your name as in Table 2., the IRS considers them to be a single balance of pre-tax IRA dollars- in this case $60,000.

Imagine that you’re trying to create a Backdoor Roth IRA.  You’re on Step 3 filling out form 8606 and you realize that you must account for pre-tax IRA dollars.  I’ll skip to the punchline: because you have pre-tax IRA dollars, the IRS considers any transfer from a Non-Deductible Traditional IRA to be a pro-rata distribution of the pre-tax dollars you have in your pre-tax IRA accounts and the amount you just deposited into the Non-Deductible T-IRA.

Here’s the worst part: unless you keep immaculate records (typically via a series of form 8606’s) on the portion of your Traditional IRA dollars that are pre-tax and after-tax, you’re at high risk of inadvertently paying tax twice on the after-tax contributions down the road because it’s easy to forget how much of your Traditional IRA balance is pre-tax versus after-tax.

You have a couple of choices when solving the pro-rata rule problem.

The best way to manage the Pro-Rata Problem is to avoid it by never putting money into pre-tax IRAs.  To be clear, the TSP or a 401k / 403b are not IRAs.  You can have money in the Traditional TSP (or 401k/403b) and still execute Back-Door Roth IRAs.  Here are some other avoidance maneuvers:

The Backdoor Roth IRA is a phenomenal tool for building wealth and securing the retirement choices that pilots deserve.  The Backdoor maneuver legally circumvents the income limits on Roth IRA contributions and secures the tax-free growth and retirement distributions that Roth accounts provide.

If you don’t have money in any pre-tax IRAs (Traditional IRA, SIMPLE IRA, SEP IRA), a Backdoor Roth IRA is a simple 3-step process.  If you do have money in pre-tax IRAs, you need to tread carefully to avoid overpaying that tax man, but a Backdoor Roth IRA may still be an option.  Even if you’re in the 24% bracket today, there’s a great chance you’ll be in a higher tax-bracket as your earnings grow so it’s worth doing the homework to try to max-perform the size of your Roth nest egg.